Giving back to Leesville 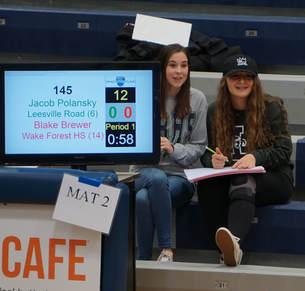 When you think about volunteering opportunities in school, a very specific set of options come to mind: helping teachers and other general classroom assistance are usually what you’d imagine.

These tasks, while beneficial to teachers, are typically  considered mundane and entirely unnecessary. Jobs such as these often discourage students from volunteering at all since many are unaware that other volunteering positions within school even exist. The last place most would look for a volunteering opportunity is in high school athletics — not to participate as an athlete but to become a team manager.

For Emma Polansky and Brenda Rizzuto, this was precisely the position they never knew they wanted. Polansky and Rizzuto are freshman this year but began managing for Leesville’s wrestling team during their eighth grade year. 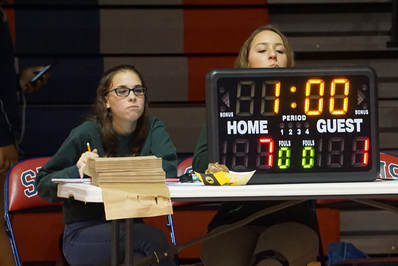 Rizzuto tells a similar story, as both Polansky and herself have brothers on the team.

The two now have various responsibilities as a part of the team, including keeping match scores, recording statistics, and running match clocks. However, Polansky and Rizzuto didn’t pick up on all of these skills on their own. The pair learned how to perform their duties from the previous wrestling manager, Alex Blanke. Initially, the two acted as assistants of sorts to Blanke, until she ultimately gave up the position to focus on her own academics and athletics. This sort of volunteering has a deeper meaning due to it generational nature; it is a learned position, passed down from one person to the next. Now, the two proudly bear the mantle of official wrestling managers. 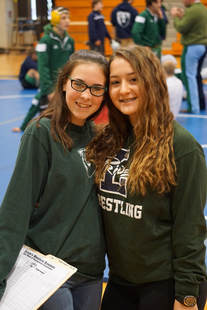 “After more than a year with the team, it almost feels like they’re family now,” said Rizzuto. “And I’ve made some really close friends at the tournaments we get to go to every weekend.”

As members of the team, Polansky and Rizzuto travel to wrestling tournaments all over the state—often times on the athletic bus with the team. Their service for the team has taken them from Raleigh, to Charlotte, to Wilmington, and just about everywhere in between. “It’s always chaotic and crazy, but it’s almost always a lot of fun hanging out with the guys,” said Rizzuto.

Traveling with the team has led to lasting friendships with both wrestlers from Leesville and other schools; forging relationships with people they would have never met otherwise. The only real sacrifice: countless hours and weekends spent donating their time. 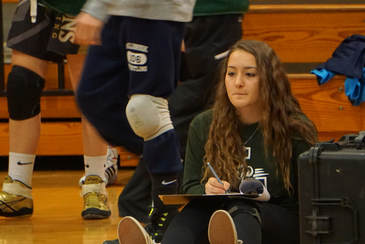 “They’re giving up their time to keep score, maintain statistics, and support you guys [the wrestlers],” said Jason Wyss, the head coach of Leesville’s wrestling team. “It would be a struggle without them keeping stats. Accurate stats is a good thing to have, and super important in motivating the wrestlers.”

“For them, I feel like they did it for the team,” said Wyss. “For later on in life, they’ve definitely earned their volunteer hours—I know that’s important for college—but for now I just feel like they’re just motivated to see you guys wrestle.” The familial bond Polansky and Rizzuto have formed with the team is easily one of the greatest takeaways from their managing careers, and typically what drives them to continue this position.

Though this is only their second year managing, the two have carved out a bit of a reputation for themselves in the managing community. At many tournaments, the two are often recognized and asked to head scoring tables and assist the under equipped managing staff of certain schools. With all of that said, this is only the beginning for this pair.

“I get to do this with one of my best friends, Brenda Rizzuto, and the team is really like a family and I really enjoy being part of it,” said Polansky. “I’ve already watched graduating class go through the program, and I’d really like to see more guys go through it. You make friends you wouldn’t make otherwise—I’d love to continue managing.”

While a bit unorthodox and time consuming, managing for a sports team is a fulfilling and unique volunteering experience. It provides an opportunity to travel all over the state, learn an entirely new set of skills(sports statistics/analytics, team management, etc.), and forge lifelong friendships—in addition to simply gaining volunteer hours. If you are looking for a long term; but rewarding; volunteer position to fulfill your community service requirements, look no further than your high school wrestling team.
Photos used by permission of Emma Polansky

Giving back to the community

Volunteering for the Food Bank of Central and Eastern North Carolina